Every summer, Hydro-Québec files a rate adjustment application with the Régie de l’énergie, an independent regulatory body. This application is analyzed according to a rigorous process that includes public hearings in December, during which representatives from all stakeholders can express their views.

In March, when the Régie de l’énergie has completed its analysis, it sets the electricity rates that will go into effect on April 1.

Hydro-Québec is requesting an increase of 1.9% on April 1, 2016. It would apply to residential customers and most business customers. The main reasons for this adjustment are an increase in supply costs and the costs resulting from the harsh temperatures of the past two winters. However, the company’s productivity gains and a decrease in the cost of service have kept the adjustment to a minimum. 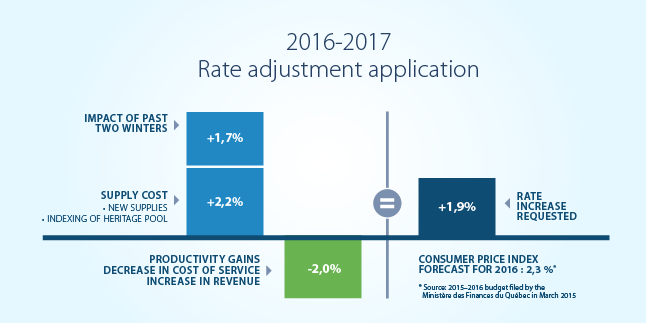 If the Régie approves Hydro-Québec’s application, the monthly impact of the 1.9% rate increase would come to the approximate amounts shown below, depending on the type of home. 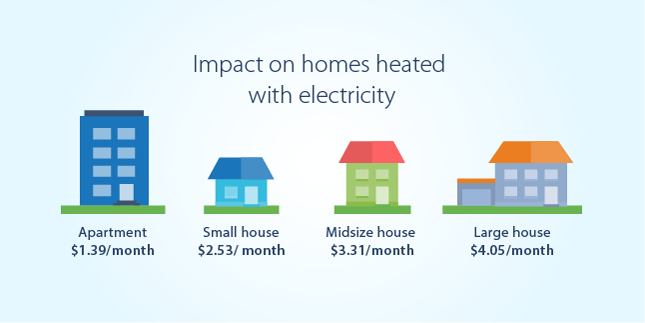 Even with this increase, Hydro-Québec’s residential rates will still be the lowest in North America. 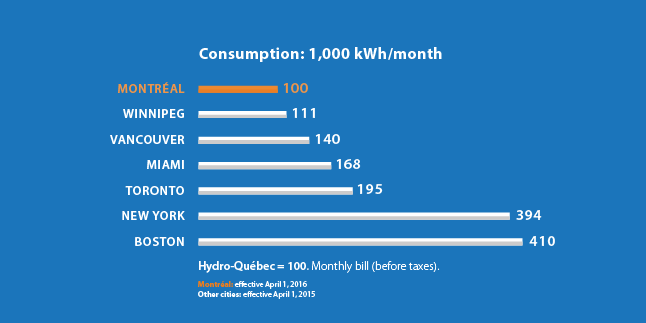 Hydro-Québec’s rate applications are based on the expenses it will incur to provide electricity service to all Québec customers the following year and on the revenue it expects to receive from customers when they pay their electricity bills.

Sometimes, this revenue is greater than the anticipated expenses. In that case, the Régie de l’énergie may adjust the rates downwards, as it did in 2011 and 2012.

However, if revenue is lower, the Régie may approve a rate increase to cover the expenses and achieve a balance.

The rates are set in such a way as to allow Hydro-Québec to generate the revenue it needs to cover the expenses it will incur to provide electricity service to its customers. These expenses can be divided into four broad categories: electricity purchases, power transmission, distribution system operation and maintenance, and customer service.

A small percentage (about 10%) of Hydro-Québec’s earnings are generated by Hydro-Québec Distribution. Most of its earnings come from Hydro-Québec Production, which is notably in charge of exports.

Consequently, there is no connection between the company’s annual earnings and the rate application filed with the Régie de l’énergie. It should also be noted that the annual dividend paid by Hydro-Québec to the Québec government, which represents 75% of the company’s net income, is used to finance public services, thus benefiting all Quebecers. The dividend paid to the Québec government for 2014 amounted to $2,535 million.

Even with the requested adjustment, Hydro-Québec’s residential rates will still be the lowest in North America.

Electricity rates reflect the revenue required to cover the expenses that Hydro-Québec will incur to provide electricity service to its customers the following year. In 2011 and 2012, rates went down. In 2013, 2014 and 2015, the Régie de l’énergie authorized rate increases.

The heritage pool consists of 165 terawatthours (TWh) of electricity that Hydro-Québec Production sells to Hydro-Québec Distribution at a low price each year. It meets about 90% of Quebecers’ needs.

The price of the heritage pool has been pegged to the Consumer Price Index (CPI) since 2014, as provided for by the Act respecting the Régie de l’énergie.

The increase will be the same for all residential customers and most business customers. However, since by law the indexing of the heritage pool does not apply to large-power industrial (Rate L) customers, the increase requested for them is 1.2%.

Any power bought at a price higher than the mean supply cost of about 3¢/kWh puts upward pressure on electricity rates. For instance, the mean cost of wind power is 10¢/kWh. This power is integrated into the grid pursuant to orders-in-council adopted by the Québec government, essentially for economic and regional development reasons that Hydro-Québec respects.

By maintaining tight control over costs, Hydro-Québec is able to partially absorb the pressure of inflation and the natural growth in its business in response to Quebecers’ needs.

This year, a decrease in distribution costs, thanks in part to productivity gains of $36 million achieved through the rollout of the next-generation meters, has partly offset (-2.0%) some of the additional costs, thus limiting the rate increase requested.

Hydro-Québec’s new efficiency efforts are in addition to those that have been deployed since 2008, bringing total gains achieved for distribution activities to $398 million. If these gains had not been achieved, the company would have to assume additional costs of $398 million per year. Consequently, there is a direct connection between our efficiency efforts and electricity rates.

Hydro-Québec Distribution will maintain its programs in support of low-income customers and has earmarked $32 million for this purpose. Several initiatives are being considered, mainly to help customers who have personalized arrangements to pay their electricity bills and arrears:

In addition, Hydro-Québec Distribution has allocated close to $10 million to energy efficiency programs for low-income customers.

We would like to remind everyone that customers having trouble paying their electricity bills should contact Hydro-Québec to set up a payment arrangement.

Electricity rates must cover the expenses Hydro-Québec will incur to provide electricity service to its customers. Even with the proposed increase, our residential rates will still be the lowest in North America.

A small percentage (about 10%) of Hydro-Québec’s earnings are generated by Hydro-Québec Distribution. Most of its earnings come from Hydro-Québec Production, which is notably in charge of exports.

Hydro-Québec does not sell power more cheaply to outside markets. When we deliver large amounts of high-voltage power to a single location, the cost is lower than when we deliver the same amount at low voltage to tens of thousands of households. It’s the same as for most consumer products: the difference between wholesale and retail prices is due to economies of scale.

In our case, the power we export is transmitted to US wholesale markets over our high-voltage grid. In the US, this power is purchased by local distributors, who in turn deliver it to their American customers. It stands to reason that these distributors resell our power to their customers at a higher price.